Teun Koopmeiners slid home an 84th-minute penalty against Torino on Thursday to complete a hat-trick and a 3-1 win that lifted Atalanta to the top of Serie A.

Atalanta moved to 10 points after four games, level with Roma, but the third goal put the Bergamo team top on goals scored.

Torino, who could also have taken over the lead with a big enough win, dominated possession but squandered good chances and stayed seventh.

Koopmeiners was ruthless, particularly from the penalty spot. 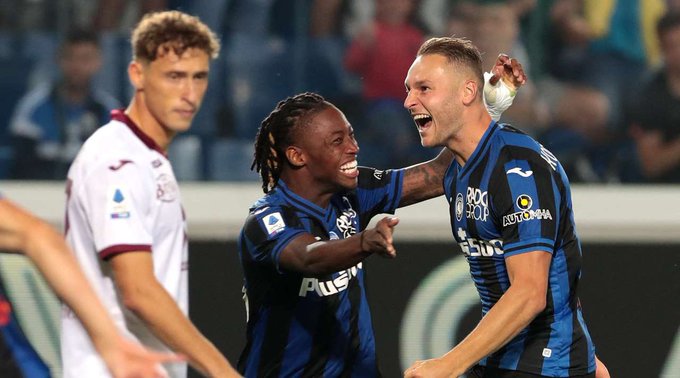 Two minutes into the second half, Torino cleared a free-kick only as far as the Dutch midfielder who smashed the ball home from 25 yards out.

That took Atalanta into a tie for first.

Nikola Vlasic knocked the hosts off top spot with a goal on 77 minutes.

Koopmeiners had the last word.

Valentino Lazaro brought down Atalanta substitute Ademola Lookman and Koopmeiners rolled his penalty right and inside the post.

That brought a joyous end to an evening that got off to an emotional start for the home fans as Josip Ilicic bid them farewell.

The Slovenia forward was one of the symbols of a flamboyant Atalanta side which enchanted Europe with an all-out attacking style of football.

Mental health and physical problems meant he hardly featured over the last two years. The 34-year-old agreed on Wednesday to terminate his contract with the club.