Jadon Sancho fired Manchester United to a 1-0 win at Leicester on Thursday as the England forward showed he still has a role to play despite the big-money signing of Brazil winger Antony.

Sancho netted with a clinical finish in the first half to seal United’s third successive Premier League victory.

It was a well-timed contribution from Sancho, coming just hours after United officially confirmed their £82 million ($94 million) swoop for Ajax’s Antony.

United manager Erik ten Hag worked with Antony in Amsterdam and the 22-year-old looks likely to be a regular in the right wing role currently occupied by Sancho.

If there are doubts in his mind about retaining his place, Sancho did his best to remind Ten Hag of his qualities with his second goal of the season.

United moved up to fifth place and sit just one point adrift of the top four as Ten Hag begins to make an impact after a nightmare start to his reign.

Beaten by Brighton and Brentford in their first two matches of the Ten Hag era, United have climbed off the bottom of the table without ever looking completely convincing.

But Ten Hag will be satisfied with his team’s latest display of spirit and determination, the qualities he demanded they show after losing 4-0 at Brentford.

United were unchanged from the side that won 1-0 at Southampton last weekend, meaning Cristiano Ronaldo started on the bench for a third successive game.

Ronaldo had hoped to leave United before the transfer window shut on Thursday, but the Portugal star was unable to find a suitor willing to meet the club’s asking price and his desire to play in the Champions League.

Ten Hag says he is “on the same page” with the 37-year-old striker about his role, but Antony’s arrival could further limit Ronaldo’s playing time.

The Brazilian did not sign in time to feature against the Foxes, leaving Sancho, Marcus Rashford and Anthony Elanga to form United’s attacking trio.

But it was Sancho who put United ahead in the 23rd minute.

Bruno Fernandes and Rashford combined to carve Leicester open and Sancho took a touch around Leicester keeper Danny Ward before slotting in his second goal this season. 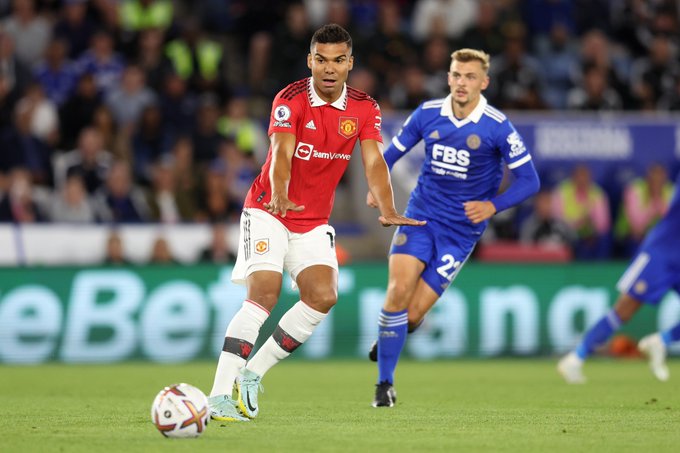 Leicester boss Brendan Rodgers shook his head in frustration as Eriksen cut through his defence moments later, only for Ward to save this time.

Leicester are bottom of the table after taking just one point from their first five games, their worst start since 1994.

Rodgers has bemoaned the unstable atmosphere created by players looking to leave.

One of those unsettled stars, French defender Wesley Fofana, joined Chelsea ahead of the transfer window closing, which Rodgers hopes will bring more focus to his squad.

Leicester still looked out of sync until Harvey Barnes curled narrowly wide with United keeper David de Gea rooted to the spot late in the first half.

Finally playing with some urgency, Leicester went close soon after the interval when James Maddison’s free-kick forced a superb one-handed save from De Gea.

Ten Hag responded by introducing Brazil midfielder Casemiro for his second appearance since signing from Real Madrid, then sent on Ronaldo as United laboured to keep Leicester at bay.

The vastly experienced Casemiro’s stout presence in front of the United defence was a significant blockade to Leicester’s hopes of snatching a draw.

Ronaldo nearly stole the spotlight in the closing stages with an acrobatic bicycle kick that drifted just wide as United held on.