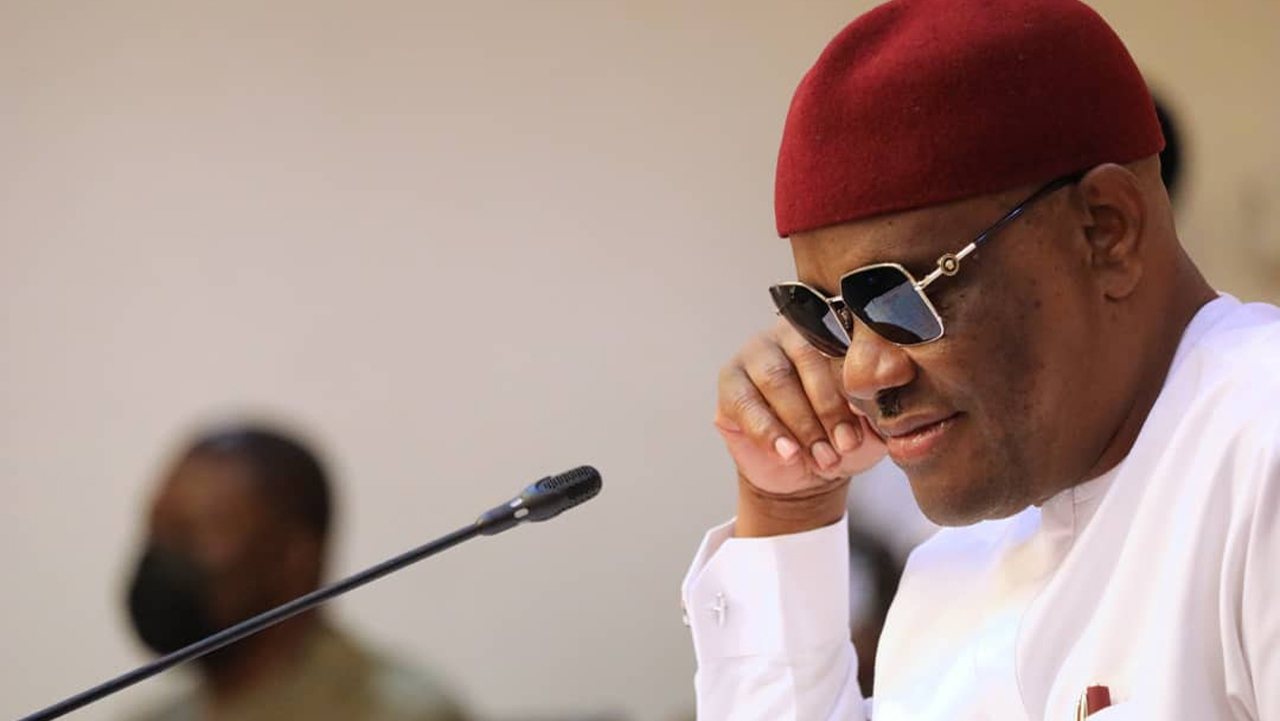 • As Lagos House Declaration Echoes
Rivers State Governor, Nyesom Wike has, by his recent activities within the group of five Peoples Democratic Party (PDP) governors, transformed himself from being the Governor-General of South/South geopolitical zone to an alternate chairman of Southern Governors’ Forum.

But for the unforeseen electoral accident that befell him during the May 28 PDP presidential primary in Abuja, the Rivers State governor had planned to be the one flying the party’s flag in readiness for the February 25, 2023 presidential contest. In absence of that electoral preoccupation, however, Wike had adopted the political activism of an opposition chief within his party.

As a veteran of many electoral battles, the outgoing governor of oil-rich Rivers State, must have planned his campaigns by spelling out the subheads for pre-primary, post primary electioneering, as well as, laid out the logistics, budgets and incidentals.

It goes therefore without saying that funds and logistics earlier budgeted by the governor in anticipation of victory at the presidential primary, are being expended in his new enterprise. Those who expected the swashbuckling young man to withdraw to Brick House in Port Harcourt, to sulk, lick his wounds and bemoan his loss, must have been disappointed.

As a politician that walks his talks, Nyesom Wike has been talking and walking his talks. First, he declared his opposition to the emergent political structure in PDP, insisting that the Southern flank must be complemented with the chairmanship position in response to the election of the presidential standard bearer from the Northern region.

Wike had asserted that failure to carry out that balancing act in the PDP leadership structure, he would not be involved in the presidential campaigns. It was on that premise that the Ayu-must-go refrain entered into the party’s nomenclature, which is the basis for the call on the national chairman, Senator Iyorchia Ayu, to resign. Wike had also recalled that the national chairman, Ayu, in recognition of the need for balance of interests between North and South, had covenanted to resign in the event that a person from the North as he, emerges as the party’s presidential candidate.

Although its not easy to pinpoint where the rain of divisive bickering started beating the main opposition party, the real battle started from within the presidential primary ground in the Velodrome of the Moshood Abiola Stadium, Abuja.

Sokoto State governor, Aminu Waziri Tambuwal, who was among the presidential aspirants capitulated and decided, shortly before balloting was to begin, to step down. Not only did Tambuwal breach the party’s rule by taking another opportunity after the initial time allotted to aspirants, he urged his supporters to cast their ballots for a former Vice President, Alhaji Atiku Abubakar.

This development was said to have riled Wike, who had threatened to disrupt or invalidate the process, but was begged to allow sleeping dogs lie so that PDP could get its acts together and sack the governing All Progressives Congress (APC) from power. Sources disclosed that the Rivers State was actually told that there was nothing to worry that even if he did not clinch the ticket, he would be sure to run whoever emerges.

But, another juncture was reached when the presidential candidate, Atiku Abubakar, instead of keeping to the initial nuanced promise to choose Wike as his running mate went for the Delta State governor, Dr. Arthur Ifeanyi Okowa.

Although Governor Wike has on many occasions denied interest in the position of presidential running mate, party insiders said the Rivers State governor could not come to terms with the possibility of an Okowa being his political leader in South/South zone, especially after he (Wike) had invested heavily to sustain PDP in its wilderness of opposition.

Not that alone, Wike disclosed how shortly after his emergence as the PDP presidential contender, Atiku informed him that since he (Atiku) has become presidential standard bearer, the national chairman, Dr. Ayu, should vacate the office to provide needed balance in PDP.

Apart from the perceived humiliation of being sidelined even after a committee that was set up for the purpose of screening potential Vice Presidential candidates had placed him tops, Wike took arms over Atiku’s information, which was more of a recollection of events that preceded Ayu’s selection as PDP chairman.

Ever since the matter broke out, Wike has made Ayu’s exit the bone of contention, insisting on that conditionality as basis to relate with the party and its presidential campaigns. To add weight to his threat, the Rivers State governor co-opted Governors Samuel Ortom (Benue State), Dr. Okezie Ikpeazu (Abia), Engineer Seyi Makinde (Oyo) and Ifeanyi Ugwuanyi (Enugu) to his side.

It is with these governors, which have now come to be known as the Group of five (G5) that Wike has been keeping news about the unease in PDP on the front burner of national discourse.

Due to a combination of concerns, the Enugu State governor, Ugwuanyi, had not been tagging along the group in their foreign junkets. Doubts as to whether Ugwuanyi was still in support of Wike’s ‘principled stance’ against the lopsidedness in PDP gained traction when the Enugu State chief executive was the only governor at Atiku’s meeting with Southeast stakeholders in Enugu.

But, in what appeared as a confirmation of the togetherness of G5, Wike promptly paid a visit to Ugwuanyi in Enugu, which was also reciprocated by the governor’s attendance in their next G5 meeting in Port Harcourt.

Hopes that Wike and co would jell with Atiku and PDP leadership dissipated when the governor announced during a press conference that PDP would win all other elective positions in Rivers State except the presidency.

Barely one week after that disclosure, Wike paid to host two APC Governors-Dave Umahi and Ben Ayade-at his personal residence in Rumuepirikom, Obio-Akpor council. Although the governors, who were later joined by Ikpeazu met behind closed doors, the general perception in the state was that Ayade and Umahi came to solicit for Wike’s support for the APC presidential candidate, Tinubu.

Ayade and Umahi were the two Southern governors that defected to APC after winning their second term elections in 2019. Both governors had complained of Wike’s schemes to monopolise control of the party structure.

Their meeting after the presidential primaries of APC and PDP had been won and lost, raised fresh concerns that a new political realignment must be in the works.

Sources close to the governors hinted that Wike was building a broad-based Southern coalition around the July 5, 2021 Lagos House meeting of the Southern Governors’ Forum, which Ayade was the only absentee.

It could be recalled that during the meeting in Lagos, the 16 governors present resolved among other things that the 2023 presidency should be zoned to the South in recognition of the North-South power sharing arrangement in the country.

In the six-point communique read by the chairman of Southern Governors’ Forum, Arakunrin Rotimi Akeredolu, the governors affirmed the imperatives of state police.

While announcing Lagos State as the permanent secretariat of the forum, Governor Akeredolu, who read out the resolution to journalists, had stated: “The Forum reiterates its commitment to the politics of equity, fairness, and unanimously agreed that the presidency of Nigeria be rotated between Southern and Northern Nigeria and resolved that the next president of Nigeria should emerge from the South.”

Even though details of Wike’s bi-partisan meetings have not been made public, snippets gathered from discreet inquiries show that the bridge to the reconciliation between Wike and Atiku/Ayu-led PDP NWC has broken down irretrievably.

For instance, it was gathered that Wike is running with the message of southern solidarity as well as espousing freedom of voter preferences for Tinubu and Obi. The Rivers State governor was said to have received the strong commitment of the G5 not to work for the PDP presidential candidate, Alhaji Atiku Abubakar, in next year’s presidential poll

The implication of the new alliance with the Southern APC governors is that the governors want to implement the decisions reached at the Lagos House meeting. However, given the differences in the political backgrounds of the governors, especially their second term and senatorial ambitions, it was not possible for them to settle for a particular candidate between the APC and LP presidential contenders.

That devolution of presidential support among the governors in the Wike alliance must have informed the decision of Oyo State governor, Makinde, to endorse Tinubu’s presidency. Speaking through his deputy, Bayo Lawal, at the reception of the APC presidential candidate by the Afenifere leader, Pa Reuben Fasoranti, Makinde said he stands with Yoruba interest.

Expressing veiled solidarity and support for Tinubu’s presidential ambition, the Oyo State governor noted that “though separated by political affiliation, (we are) united by strong ethnic bonds.

The governors of Bayelsa and Edo States, Senator Duoye Diri and Godwin Obaseki, do not show any signs of alliance with Wike, perhaps because while Diri is a coordinator in the PDP Presidential campaign committee, Obaseki was among the governor opposed to Ayu’s exit.

For the Southeast governors, the fact that the presidential and Senatorial elections will take place on the same day puts them at a very tricky position. All three governors – Umahi, Ugwuanyi and Ikpeazu – are PDP Senatorial candidates. Consequently, any attempt by them to disavow or vouch for the LP presidential candidate, Obi, could tend to lift the public image of their rivals or be interpreted as anti-party activity on Umahi’s part.

Nonetheless, going by the recent posturing by Wike and his new found alliances, there seem to be no more room for reconciliation within PDP. It was perhaps in recognition or to emphasise that fact that Atiku told the world that he and his team have moved on.

Speaking in a Voice of America Hausa Service monitored in Abuja, the PDP presidential hopeful admitted that though the issue of whether Ayu should resign as demanded by Wike and co has not been resolved, it obvious that change of leadership cannot be contemplated at this time.

The former Vice President declared: “We have moved ahead. I don’t have any worries about that anymore. And, at this junction it is improper to talk about leadership change in the party while elections are fast approaching.

“We are yet to resolve the matter. But, we have moved ahead. Our train has moved. We leave the dislocations to the dustbin of history. It is not proper, at this time, to contemplate a change of leadership of our party, whereas we are approaching the elections.”

Those who expressed doubts about any reconciliation or cohesion within PDP believed that Atiku’s decision to leave the party in 2013, which facilitated APC victory, was likely to be requited, especially given Wike’s hard stance and demand for Ayu’s ouster.

So, as the beef that travelled in PDP during the build up to the 2015 presidential election, has returned, it is left to be seen how far the North-South polarity being powered by Wike would impact on the fortunes of the party.