A video making rounds, showed the beautiful chef posing for a family photo with her husband, Davido and his father

Chioma was at the inauguration ceremony of Davido’s Uncle, Ademola Adeleke, as the 6th executive governor of Osun state which held today November 27.

This will be her and Davido’s first public appearance after the unfortunate loss of their son, Ifeanyi 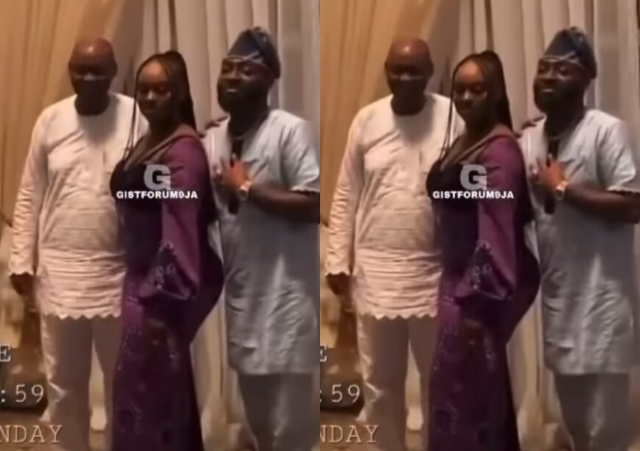 After much anticipation, Chioma has been spotted for the first time since her son’s demise, with Davido and his father, at Sen. Ademola’s inauguration.

His uncle, Senator Ademola was inaugurated as the Governor of Osun State today.

A video making rounds, showed the beautiful chef posing for a family photo with her husband, Davido and his father.

Chioma was spotted with a smile, as she stood in between father and son.

This is coming after Davido’s father queried him over Chioma’s absence as the family take photo.

“Where is Chioma?” Davido’s father questions him about Chioma’s absence as the Adelekes take family photo

Adelekes are in Osun State for the inauguration ceremony of Senator Ademola Adeleke.

As the family gathered to take pictures, Davido’s father queried him over his wife’s absence.

He could be heard questioning him about Chioma’s absence.

He said, “Where is Chioma?”

However, we didn’t hear what the singer told his father.

Reacting to it, many praised the singer’s father for showing Chioma love.