Anglican Devotional 1 September 2022 – Whose Servant Are You? 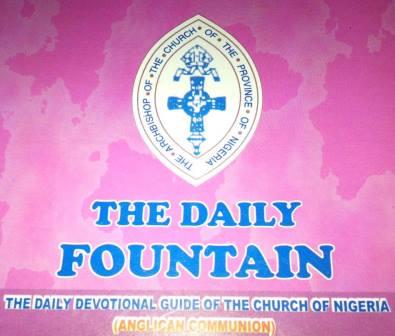 The Daily Fountain Devotional of the Church Of Nigeria (Anglican Communion) 1 September 2022 – Whose Servant Are You?

TOPIC: Whose Servant Are You?

In a Christian counselling session, I encountered a brother who had been held bound by pornography and lust – he looked helpless. ‘Why do you do these things’, I asked? ‘Daddy, I am always helpless whenever this influence comes upon me’, he said. This is the situation of so many people, and regrettably some of them in their helplessness, hide under ‘grace’ to continue in their evil ways. Grace is a package. Inside it is God’s forgiveness that brings a man to salvation, as well as the ability to live above sin and the world. St. Paul saw this grace as the instrument that brings men to the servitude of Christ who loves them to the point of dying for them on the cross.

The influence of true grace makes a man a servant of Christ, expressed in righteousness. Anything contrary to this, is not the grace of God in Christ and definitely leads to death. What are you a servant to? Is it sin or righteousness? What habits or addictions are you covering up under the guise of living in grace? Remember that children of God who are beneficiaries of the grace in Christ Jesus should have their fruit unto holiness, which ends in everlasting life with Him.

PRAYER: Dear Lord, may I not take Your grace for granted, Amen.

Anglican Devotional 2 September 2022 – The Weakness Of The Flesh